Towards the end of 2016, I began on a project with my dad to create some rather flashy umbrellas.

I had just finished my twitter bot when I was approached by my dad; He wanted to make an umbrella project he’d seen online, but asked me to program the arduino/LEDs.

Note: I don't know exactly which post this idea originated from, but it's likely this one.

As you can see, code already exists for umbrellas such as this. However I wanted to build upon the idea to create more sophisticated rain pattern capabilities - primarily a setting for the “raindrops” to change colour as they fall. I had never really programmed anything involving hardware such as LEDs so it was a great way to learn. In future I’d like to clean up the code, in which case I’ll either update here or write a new post.

Made good progress this evening on my latest project, LED rain for a lights festival at half term ^_^ pic.twitter.com/nWxsnELUEG

Over the years my dad and I have improved the umbrella, we now have a couple versions including a non-transparent blue umbrella version which is surprisingly effective! We’ve taken umbrellas to a few different events (such as a festival of lights, EMF camp and Illuminate the Gardens) and always have overwhelmingly positive response. Using hardware such as LEDs is a great oppurtunity to engage both technically minded people and the general public. 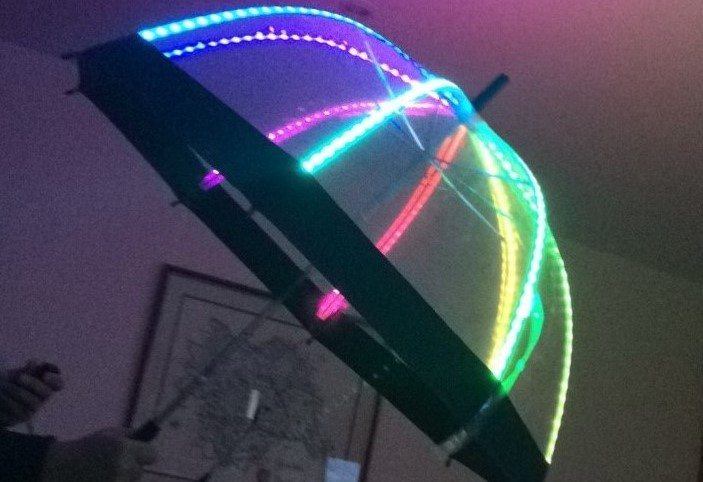